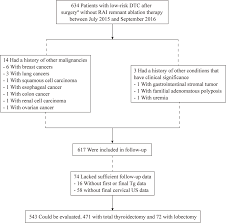 In patients with low-risk differentiated thyroid cancer undergoing thyroidectomy, the postoperative administration of radioiodine (iodine-131) is controversial in the absence of demonstrated benefits.

METHODS – In this prospective, randomized, phase 3 trial, we assigned patients with low-risk differentiated thyroid cancer who were undergoing thyroidectomy to receive ablation with postoperative administration of radioiodine (1.1 GBq) after injections of recombinant human thyrotropin (radioiodine group) or to receive no postoperative radioiodine (no-radioiodine group). The primary objective was to assess whether no radioiodine therapy was noninferior to radioiodine therapy with respect to the absence of a composite end point that included functional, structural, and biologic abnormalities at 3 years. Noninferiority was defined as a between-group difference of less than 5 percentage points in the percentage of patients who did not have events that included the presence of abnormal foci of radioiodine uptake on whole-body scanning that required subsequent treatment (in the radioiodine group only), abnormal findings on neck ultrasonography, or elevated levels of thyroglobulin or thyroglobulin antibodies. Secondary end points included prognostic factors for events and molecular characterization.

RESULTS – Among 730 patients who could be evaluated 3 years after randomization, the percentage of patients without an event was 95.6% (95% confidence interval [CI], 93.0 to 97.5) in the no-radioiodine group and 95.9% (95% CI, 93.3 to 97.7) in the radioiodine group, a difference of −0.3 percentage points (two-sided 90% CI, −2.7 to 2.2), a result that met the noninferiority criteria. Events consisted of structural or functional abnormalities in 8 patients and biologic abnormalities in 23 patients with 25 events. Events were more frequent in patients with a postoperative serum thyroglobulin level of more than 1 ng per milliliter during thyroid hormone treatment. Molecular alterations were similar in patients with or without an event. No treatment-related adverse events were reported.

In patients with low-risk thyroid cancer undergoing thyroidectomy, a follow-up strategy that did not involve the use of radioiodine was noninferior to an ablation strategy with radioiodine regarding the occurrence of functional, structural, and biologic events at 3 years. (Funded by the French National Cancer Institute; ESTIMABL2 ClinicalTrials.gov number, NCT01837745. opens in new tab.)