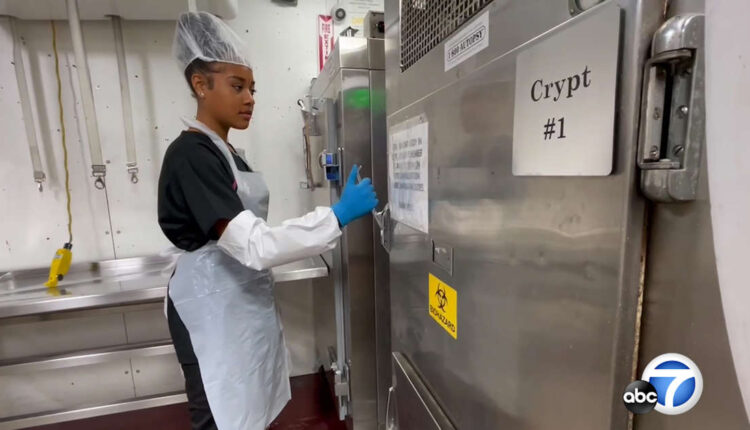 EL SERENO, LOS ANGELES (KABC) — A Santa Clarita teen, who is a junior at Notre Dame High School, already has a unique resume that stands out.

Libriti Greene, 16, is a part of an award-winning debate team, she’s in water polo, a member of the Black student union and has assisted in 19 autopsies.

I have learned how to take down notes, first examine the body on the outside and look for abrasions, drug-track marks. I have also learned how to do white-cut incisions,” said Greene, an intern at 1-800-AUTOPSY.

Greene continued to describe in detail all of the skills she’s picked up through her hands-on experience with the internship. She has been participating in autopsies since she was 14 years old.

1-800-AUTOPSY is a private autopsy company in El Sereno. They are known for their work in high-profile cases and for having this separate examination room that’s leased out as a production set.

“She is very mature … when she came here she was prepared because of all of the books her dad gave her,” said Vidal Herrera, the founder of the autopsy company. “Libriti is actually one of my best friend’s daughter. When you were interviewing me in brought back a lot of memories.”
One of those memories was when Greene was diagnosed with a rare kind of leukemia called Philidelphia Chromosome.”I have been in remission for five or six years now,” said Greene. “I think that’s what kind of what originally kind of sort of sparked my interest about the medical field.”

Greene’s father said, her journey with cancer is also what helped Libriti develop her maturity at such a young age.

“Through those circumstances, from the age of five to seven, the majority of her conversations were with nurses and doctors. And, It kind of forced her at a very early age to be mature,” said Russel Greene, Libriti’s father.

While Libriti finishes high school, she plans to go to medical school and apply to Howard, UCLA and Johns Hopkins, to name a few.

“I think she has the potential. We are going to help her go forward,” said Vidal.”I think it’s very special that I can appreciate and I love what I am doing,” said Greene. “I mean this has been one of the best experiences of my life. So, I am incredibly grateful.”

As the Delco jail returns to county control, its new warden is focused on mental health and staff training