What Is the Reason for Using the Western Blotting Technique? 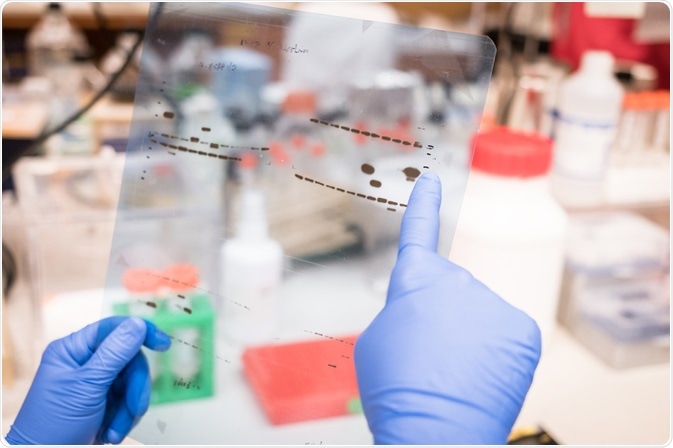 In a clinical setting, researchers who need to determine if a sample contains a particular protein for identification purposes or who are trying to diagnose a patient’s disease often use the western blotting technique.

Back in 1975, an inventor named Edwin Southern developed a technique to analyze strands of DNA using electrophoresis. He gave the process his name, the Southern blot. It involves separating DNA bits by length and labeling them with radioactive material. A DNA probe detects the radioactive material.

Later, scientists adapted Southern’s approach and called their work the “northern blot.” By 1979, another scientist improved on the technique. W. Neal Burnette used a different kind of gel for blotting proteins onto paper made from nitrocellulose. Following the naming tradition of the scientists before him, Burnette dubbed this latest approach the “western blotting technique.”

In labs, clinics, research centers and other settings where people are investigating medicines or diagnostics, there is a need for the western blotting technique.

Dividing proteins according to their sizes during gel electrophoresis in western blotting is essential for confirming the identity of a sample. Doctors will also take data from a western blot that doesn’t match their expectations and use the information discrepancy as the basis to do more research.

For example, they will work to find out why a sample has molecules of a particular weight when they expected it to be lower. The number of bands showing up in the protein identification and analysis also gives clues. When a band is smaller, the scientists have an indication that the protein in that sample has become degraded somehow or cut in two before being studied. Higher than usual bands can signify unexpected splicing in the proteins.

It plays a role in a wide range of research environments. Western blots show you whether a specific protein exists in a sample and at a particular size, by virtue of how they bind to specific antibodies.

That’s why they are often used in projects where scientists want to evaluate “levels of protein expression in cells, and for monitoring fractions during protein purification,“ according to Bio-Rad. Achieving the correct ratio of proteins is essential in research projects.

Oftentimes, a doctor will call for a western blot to supplement data obtained from other techniques based on detecting antibodies, including immunohistochemistry tests and ELISAs (enzyme-linked immunosorbent assay). This is especially the case when time is of the essence, such as HIV or prion diseases (such as “mad cow disease.”)

A physician may be treating a patient who came back home after a recent trip abroad. The patient was exposed to a variety of exotic environments, with the potential to pick up a pathogen of some kind. So, a doctor can employ a western blot to see if there are signs of a viral infection, or perhaps the disease is fungal or bacterial.

When you become sick, your body produces antigens in response. The antibodies used to defeat the infection are detectable from their proteins. And these proteins, if present in the patient, will show up in a western blot. Laboratory blotting paper changes color in the presence of an enzyme and the proteins gathered in the western blot. The color change shows the scientist what antibodies are in the sample.

In use now for more than 40 years since W. Neal Burnette first published the results of his work with western blotting, this technique has proven to be a fast and efficient way for doctors to identify the presence of ailments such as prion disease and HIV in samples from patients.

Western blotting also helps researchers determine if they are on track when developing new therapeutics that rely on antibody detection. It’s an excellent tool for discovery.

Why Do Individuals Think That LASIK Hurts?

Alcohol-Related Liver Diseases That You Should Know

Why Do Individuals Think That LASIK Hurts?

Alcohol-Related Liver Diseases That You Should Know