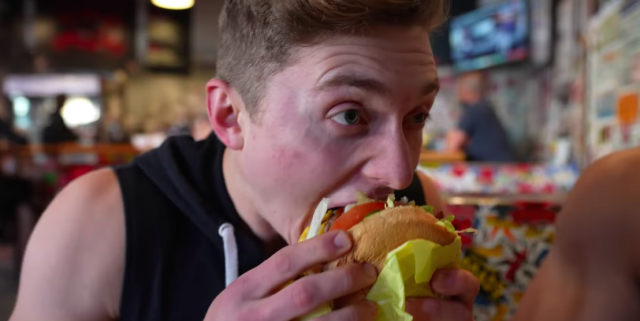 This Guy Tried to Eat 6 of The Rock’s 10,000-Calorie Cheat Meals in a Single Day

Dwayne Johnson is known for putting in the sweat to get the results he wants in the gym, and recently bulked up more than ever before in order to play a superhero in DC’s Black Adam. In addition to performing high-volume “giant sets” to build muscle, this was a process which also involved eating between 5,000 and 7,000 calories in protein-rich meals each day to help Johnson maintain his hulking physique.

Then, of course, there are his cheat days, which have become somewhat legendary, where Johnson will scarf down upwards of 10,000 calories in his favorite indulgent meals, including pizzas, sushi, and French toast.

In a new video, fitness YouTuber Brandon William tries to eat like Johnson on cheat day, taking on a menu of six of the actor’s go-to giant treats with the help of his friend Adam. They select six of Johnson’s cheat meals and put them on a wheel, spinning it at random and eating one of the choices at each mealtime until they hit the 10,000-calorie mark.

First up is a stack of 12 buttermilk pancakes with syrup, and William begins to struggle after just those first thousand or so calories. “This is going to be a tough challenge,” he says.

The second meal consists of double cheeseburgers with bacon and fries. While both guys have worked up a bit of an appetite by doing one of Johnson’s back workouts, they make the mistake of ordering their burgers at a joint known for its ridiculously large portions.

“I don’t know if I’ll be able to eat anything else today, I’m so full,” says William after forcing down his burger. At this point, they’re past 6,000 calories, and have just one more of Johnson’s cheat meals to go. William lets his Instagram followers choose this last one, and they settle on four pizzas. Both William and Adam are so full that they fail to finish the pizzas and take no enjoyment in eating at all.

“It’s insane that The Rock would have all this by himself in a day,” says William. “That actually shocks me.”

Dental Bonding: A Safe And Affordable Dental Treatment To Fix Your Broken Or Cracked Teeth