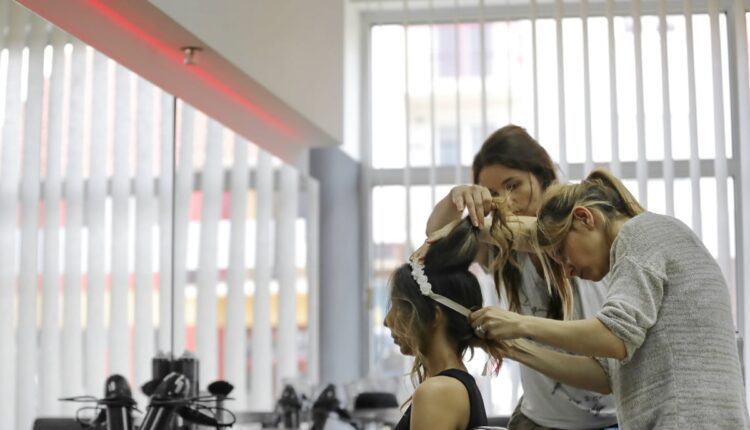 Here is his story and lifestyle:

Aric Congdon (hair stylist instagram @hairicc) is a young entrepreneur who grew up in a rural town in Connecticut, came from nothing and works hard for his money. As an international traveling hair stylist Aric earns $450,000 a year just from his beauty industry related work not including what he earns from his Marketing Company Arcc Media. While he likes to enjoy his life with the money he makes he tells us most of what he spends his money on is assets.

“I grew up in a small town with less than 7000 people in it, most of which didn’t have any real dreams or aspirations to “make it big”. Growing up as one of six has its pros and cons (especially when you’re the middle child born two days before Christmas). I learned alot about appreciating what I did have because we were in and out of shelters due to being a low income family on a single parents salary. To this day that’s probably why I save about 15-20% of my income annually because of all the trauma of growing up without. Hair was never really on my radar and I kind of fell into it by mistake. Fast forward to me being a 15 year old teenager- the worst and best year of my life. I was kicked out of my house when I came out of the closet to my parents. I was working at a movie theater, I was on track to early graduation due to doubling up on academics which in hindsight probably was the smartest thing i did. I stayed with my eldest sister for a little until it became too much for her family and then I was back on the streets between shelters and sleeping on bus benches.

One of my best friends to this day told me to come to NYC and stay with her in her dorm room illegally. Me having nothing else to lose packed one backpack and hopped on a bus. I then assisted under a celebrity stylist in the city for a year and she helped me to grow into the stylist I am today and connected me with a very well known Curly hair salon murray hill. That’s where I began to niche my talents into Curly Hair and Balayage, hair helped me to pay for education in marketing and has me debt free from student loans in the present day.

Roll up to 2016- I auditioned for American Idol and had a short stint on the show that wasn’t then added into filming. I did however make a few connections along that journey and scored my first shoot with a celebrity in Miami (Post Malone). I started getting gigs for other small ventures with Lyrical writing, composition, hair shoots, commercials, NYFW, etc. This all led to me moving out to the west coast, building a clientele not only in NYC, but the likes of San Francisco, Los Angeles and Mexico City.  Today I am a traveling international stylist who coaches and trains other Independents or Salon Owners on how to put systems in place to not only hit 100k, but 250+ by working only 5 days a week. Not only that but I run a marketing company, still dabble in the arts when I can and I travel the world. If you were to ask me 10 years ago if this is where I would be now, just shy of 25 then I would have said “you’re nuts” “.

In total Aric earns 450,000 a year from client revenue including tips, but how much does a hairstylist make?  The median income for Hairstylists in the US is $27,000 with top earners earning between 33,000-62,000 a year. Aric’s goal is in turn to elevate the industry.

“The biggest misconception about our industry is that it’s not a real job or you can’t’ make real money, but if you break down an average color and cut ticket to be 200 in an average small to mid sized town 3 clients per day makes you $3000 a week not including gratuity which totals $144,000 before taxes.”

Congdon being at the top of his game in the industry now wants to dive into helping others replicate his business model whether it be to also be a traveling stylist like himself or make over 6 figures for their families. “ There are many people in the industry who are striving to elevate and enlighten others about charging what they are worth, but many don’t understand connecting point a to point b especially for stylists who may not live in a densely populated city.”

We concluded our interview with Congdon asking him what is next for his career:-

“ My goals are to educate digitally and in person, not only that but I would like to establish the first online investment portfolio for Salon Owners, Coaches and integrated Marketing professionals to gain stake in individual businesses to grow them. Essentially a modern day Tabatha Takes Over on a branded scale. Ideally I would like to have partner salons all over the country.

How to Prepare for Breast Reduction Surgery